Chase growth not income if you want quality investments

Chase growth not income if you want quality investments

As is often the case, those entering or moving into the pension phase of retirement, are keen to invest in income-producing, dividend-yielding assets.

But according to Montgomery Investment Management founder and Chief Investment Officer Roger Montgomery, when you chase income for income’s sake, you invest in companies that may not be growing. And if you do that, the maximum return you receive may only ever be that income – or in fund manager speak, the dividend yield.

Speaking at Netwealth’s January 2017 Portfolio Construction webinar series, ‘2017 Investment Outlook’ Montgomery noted that these companies don’t grow precisely because they are paying out all their earnings as dividends and not reinvesting.

‘If a company earns $2 but pays it all out, it's not retaining any on its balance sheet in cash, nor is it reinvesting any, and so the equity at the end of year one is the same as the equity at the start of year’ Montgomery said.

In other words, if the return on equity is flat, static, the same, year on year and the equity isn’t growing, then neither will the earnings.

A higher return than the dividend yield would only be possible if an investor were able to correctly speculate that the company’s price/earning (PE) ratio rises at the time the shares were sold, but as Montgomery said, “that’s gambling, and not investing.”

By way of illustration, Montgomery compares Telstra with M2 Communications (M2) (see Table 1). In 2015, M2 merged with Vocus and Vocus is rapidly becoming one of the biggest telecommunication companies in Australia. 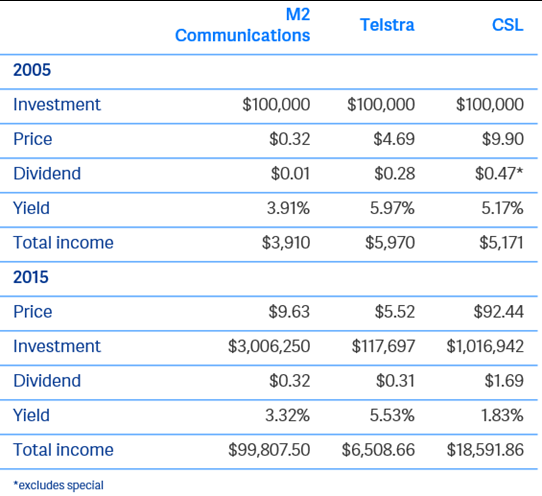 Over the period 2005-2015, Telstra was paying 100% of earnings out as dividends. Over the same period, M2 was generating attractive rates of return on equity, but retained some of the profits.

“The growth in capital and income have not kept up with inflation,” Montgomery argued. “Now, people tell me that Telstra's a low risk blue chip company. I ask you what could be a riskier investment than being guaranteed to have your purchasing power diminished? Whatever bottle of wine you could afford back in 2005, you're not drinking that wine today. Whatever restaurant you could eat at back in 2005, you're not going to that restaurant today.”

When we've got historic low interest rates, that yield on Telstra shares looks very attractive. But if you are looking for a long-duration asset, say you've got another 20 or 30 years of spending to fund, you need growth.

So the pursuit of yield unfortunately is distracting investors from investing in the right types of businesses. And in fact, it's forcing them to ignore growth. But here's the problem.

Stocks like Telstra, which sacrifice growth for the sake of income are poor quality according to Montgomery, and what investors should be looking for is high quality stocks. However, performance has been the rub. “We have ranked every company in the ASX 300 from poor to high quality – then measured performance over 12 months,” he said, “and high quality is the worst performer and low quality is best performer.”

That said, he believes this won’t last and suggests why.

In the next 20 or 30 years, at some point interest rates are going to go up. That will reduce the value of any yield that isn’t growing. The yield will have to go up for the next buyer, and that means the price will have to fall. And if there's no growth the fall is going to be more dramatic.

We also know that the emergence of inflation over the next 10 to 30 years is likely to occur, and if that happens, that's also going to reset prices lower for assets like Telstra shares, where the income is fixed.

And it's also fair to say that at some point, over a 30-year investment timeframe, there's going to be questions over credit risk for some companies and if that emerges, then that's going to reset the price lower again.

So now is the time to invest in quality he argued, because quality is relatively cheap at the moment. “It’s an appropriate time to be thinking about doing precisely the opposite to what the market is doing.”

To hear the full presentation, ‘2017 Investment Outlook’ click here or if you would like to speak to a member of the Netwealth team please contact us.

*Please note that the information and analysis in the above article is to be taken as general advice only and is the opinion of Montgomery Investment Management and is not a recommendation to acquire, dispose of, or continue to hold, any investment mentioned. The information is not intended to be a substitute for professional financial product advice and you should determine its appropriateness having regard to your particular circumstances.